Lily Does LA by Nicola Doherty 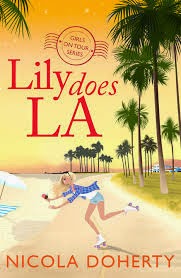 The second instalment in this hilarious, romantic and unputdownable five-part series. Perfect for fans of Lindsey Kelk's I Heart... novels.

Lily is an actress. At least, that's what she tells people, even though she's currently working in a call centre and her last big part was an ad for Sofa Warehouse. So when she's invited to her cousin Alice's wedding in LA, it's a dream come true. Alice's fiancé Sam is actually a Hollywood agent; how can Lily fail to get talent-spotted? There's only one problem; not only is Lily banned from mentioning acting, parts or producers to Sam, she's expected to spend the entire week doing wedding-related prep (read: chores) with Sam's boring groomsman Jesse. But Lily firmly believes that rules were made to be broken ...

Girls on Tour is an irresistible series of interlinked stories about four friends, ordinary girls who have extraordinary fun in faraway places. Expect the unexpected, the utterly hilarious and unforgettable, on this rollercoaster ride of love, laughs, surprises and sparks. You have a VIP pass to join each girl's adventure, so pack your bags and buckle your seatbelts, because just about anything is possible...

Lily Does L.A. is the second novella in Nicola Doherty's Girls on Tour series. I really enjoyed part one so was looking forward to reading this installment too.

As the title suggests the story revolves around Lily. Lily is an aspiring actress who has yet to break into the big time. As we meet her she is working in a call centre, and not at all happy. However, she is soon given the opportunity to escape to LA when she gets word that her cousin Alice is getting married out there, and would like Lily to go out and help with arrangements.

We also meet Sam, who is Alice's fiancé, and works in the film business....will Lily be able to resist trying to tap him up for help? There is also Jesse who is Sam's groomsman, and enlisted to help Lily with the preparations.

As the novella is only 75 pages I don't want to say much more about the plot, or it will give it away and spoil it for others reading it. I will say that I enjoyed it. I found it a fun quick read that would be great for some time out, for commuting, or just for a short bit of escapism.

I had a not of a roller coaster ride in my like / dislike of Lily. The way her story begins it tugged at my heart strings slightly and I built up an impression of what I thought she would be like. When she reached LA I changed my mind, and really went off her, but she redeemed herself to me in the end!

As with other books I have read by Nicola, I really did enjoy this one. I like the way she writes. I feel it connects me to the characters and situations and I usually become immersed in the plot quickly. There is a good mixture of laughter, but also some softer mor caring moments too. And of course, a love interest....

A good uplifting, feel good book that made me laugh. I would love to know what happens next for Lily, and am looking forward to meeting another of the girls in part three.

Thank you to Headline for providing a copy of the book via Netgalley in return for an honest review.
Posted by Jill st at 11:53